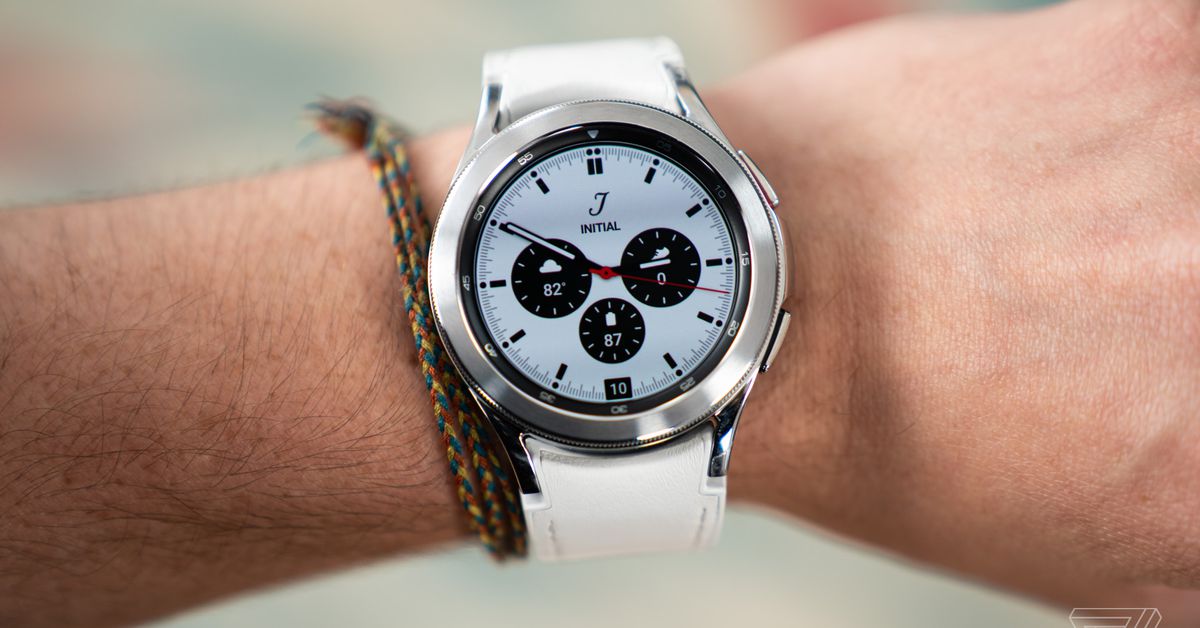 Today we’re getting our first look at the fruits of Samsung’s smartwatch collaboration with Google: the new Galaxy Watch 4 and Galaxy Watch 4 Classic. It’s a big deal in wearables, because after years of trying to go it alone with its own Tizen platform on smartwatches, Samsung is finally biting the bullet and collaborating with Google on its operating system.

I get the sense with these two smartwatches that Samsung is hitting a bit of a reset button with its wearables lineup. Yes, there’s the Wear OS operating system, but Samsung is also taking the opportunity to tweak the branding on its ranges.

So instead of splitting its smartwatches between the Active and regular ranges, now there’s the default Watch 4 and the more premium Watch 4 Classic. The Watch 4 is best thought of as a successor to the Watch Active 2 from 2019 (which means that, yes, Samsung has skipped the Active 3, RIP), while the Watch 4 Classic with its chunkier design and rotating bezel looks like a follow-up to last year’s Watch 3. Basically, the Galaxy Watch 4 is now the default, and the Classic is the step-up version.

The Watch 4 Classic starts at $349 for the Bluetooth model, rising to $399 for the LTE model, while the Watch 4 is a little less expensive with a starting price of $249 (or $299 with LTE). Both are available to preorder today, and ship August 27th.

The big difference between the two models is that the Watch 4 Classic has one of those physical rotating bezels that we’ve liked so much on Samsung’s previous smartwatches, while if you opt for the standard Watch 4, there’s a touch-sensitive bezel accessible by swiping at the edges of the screen. The Watch 4 Classic is also made of a more premium stainless steel rather than the aluminum you’ll find on the Watch 4. On the right of both watches are a pair of control buttons.

External differences aside, internally both watches share a lot of the same specs. They’re both powered by the same 5nm Exynos W920 processor Samsung detailed yesterday, paired with 1.5GB of RAM and 16GB of storage. Battery capacity varies between sizes, but Samsung reckons you’ll average around 40 hours of battery life regardless of model. There’s LTE on select models, but if you were hoping for 5G, you’ll be disappointed — Samsung says it doesn’t think it’s worth it because the amount of data smartwatches process is too small.

But the biggest departure from Samsung’s previous smartwatches is that the Watch 4 and Watch 4 Classic aren’t running its own Tizen operating system. Instead, their software is the result of a collaboration between Samsung and Google, which was announced in May. Samsung is branding the watches’ operating system as “Wear OS Powered by Samsung” although Google has called it Wear OS 3. But either way, the hope is that it combines the best of Tizen with the best of Wear OS.

On Samsung’s watches specifically, the interface you’re looking at is One UI Watch, which is effectively Samsung’s skin sitting on top of Wear OS. Think of it as Samsung’s One UI software on phones, which works with Google’s Android. It gives the Watch 4’s interface a similar look and feel to Samsung’s previous Tizen-powered watches.

Google has promised its collaboration with Samsung will lead to a host of high-level benefits for Wear OS, like improved battery life, faster loading apps, and smoother animations. But in the time I spent with the Watch 4, it was a little hard to get a sense of these improvements because they’ve never really been a problem for Samsung’s previous watches and I certainly didn’t have enough time to test out battery life. The real test will be when we start to see Wear OS 3 watches from former manufacturers that have exclusively used Wear OS in the past.

One obvious improvement of running an operating system developed with Google is that the search giant’s apps are available to use. There’s Google Maps for getting around, Google Pay, and YouTube Music. The one big question mark surrounds Google’s voice assistant, especially given the reputation of Samsung’s own voice assistant Bixby. Samsung tells me Google Assistant won’t be available at launch, and it’s an open question whether it’ll arrive at a later date. For now, that means Bixby continues to be your only voice assistant option.

Beyond its voice assistant, Samsung’s other software also isn’t going anywhere. You’ll still have access to Samsung Pay and SmartThings, so there shouldn’t be any disruption if you’re already bought into Samsung’s ecosystem.

As Samsung previously announced, the smartwatches are also capable of syncing some settings from your phone like do not disturb and your blocked callers, as well as automatically installing watch apps when you have the phone version installed (a big improvement over Tizen’s old manual process). Samsung tells me these options should work across most Android phones with Google Mobile Services, not just Samsung’s, and indicated that we should see similar features with future Wear OS watches. Alongside the convenient option of automatically installing apps via a phone, the Google Play Store is also accessible from the watch itself.

There are already promising signs that having fewer different smartwatch operating systems to target might mean better app support from third-party developers. Although it’s not new for Samsung’s wearables, Spotify has an app coming to the operating system with support for offline listening. Hopefully this is a sign of things to come.

There are also new health features to talk about with the Watch 4 and Watch 4 Classic, many of which focus around Samsung’s new 3-in-1 BioActive sensor. It combines an optical heart rate sensor, electrical heart sensor, and a bioelectric impedance analysis sensor which means detection of everything from atrial fibrillation to blood oxygen levels and body composition. It’ll also monitor your blood pressure in certain markets, although not in the US.

Samsung’s pitch is that in addition to detecting this all individually, its new smartwatches do a better job at giving you a holistic view of your overall health. There’s a new Body Composition measurement tool, which works by having you place two fingers on the watch’s right buttons and then gives you a bunch of metrics like your skeletal muscle mass, body fat percentage, and metabolic rate to poke around in. Samsung hasn’t mentioned whether the watch will sync with Google’s Fit or Fitbit accounts, but it feels like this could leave the watches packed with an almost confusing number of different fitness-tracking services.

Finally, there’s sleep tracking. Samsung says its new watches can track your blood oxygen levels while you sleep and offer more insight into your sleep patterns, while compatible smartphones can also help by detecting the sound of snoring.

Samsung’s smartwatches have been our recommendation for anyone with an Android phone for a little while, but it feels like Samsung has hit a ceiling on what it can achieve while it’s still using its own software. They’ve struggled with third-party app support and have tended to work best when used with Samsung’s Android phones specifically, requiring an array of separate apps to get the most out of the watches with non-Samsung phones.

That’s what makes this year’s smartwatches, and Google and Samsung’s collaboration in general, so exciting. It banishes so many of those little issues, like a lack of native Google apps, that have been problematic for Samsung’s recent watches. Last year we said it was time for a change from Samsung. We’ll have to see in our full review whether Samsung has successfully made it.