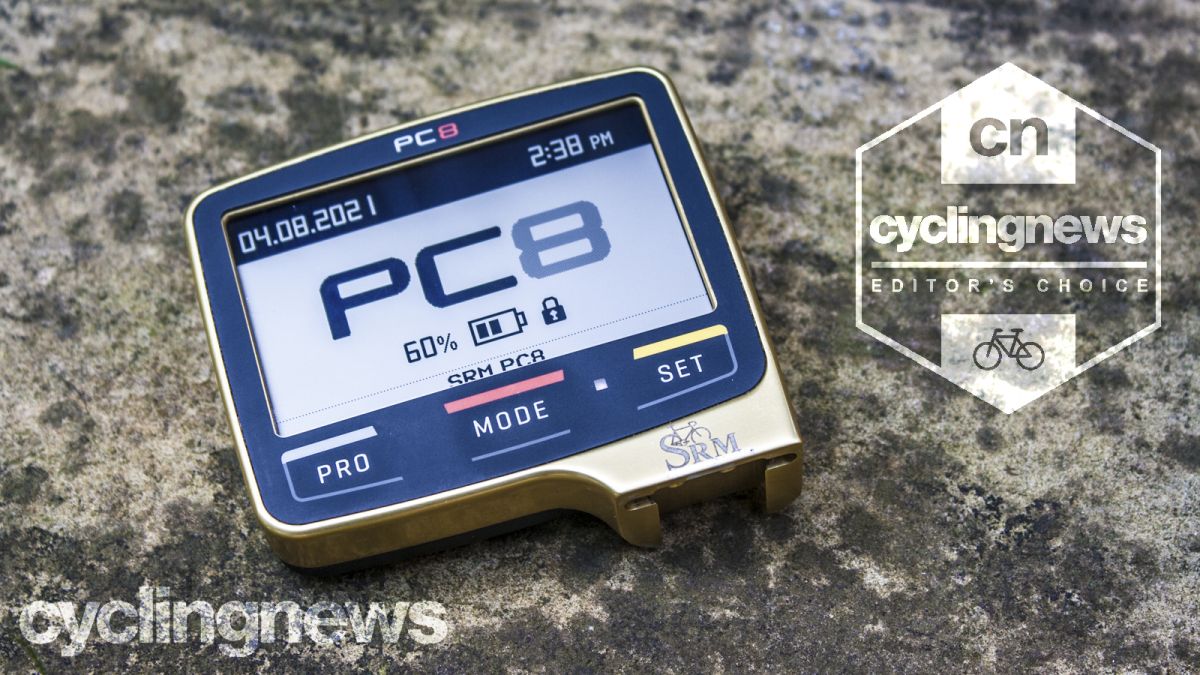 SRM needs no introduction. For the past three decades, the German brand has established itself as the industry arbiter when it comes to power meter accuracy and its head units are equally as impressive and enviable, what with the bold colourways and prominent aesthetics of the PowerControl or PC for short. The SRM PC8 replaced the PC7 as the brand’s best cycling computer back in 2014 and has aged impressively well during this time, both from a visual and technological point of view.

While bereft of any navigational prompting – something that puts it somewhat at a disadvantage compared to its rivals – it’s worth considering that it was designed for training not touring, and its modus operandi reflects this in every detail. Having used the SRM PC8 for well over a year now, it’s become my training tool of choice and the device I find myself reaching for every time I leave the front door for a ride or race.

The SRM PC8 is one of the most recognisable cycling computers in the world and for very good reason. Its bold, slab-like proportions are easy to spot, even in the rolling billboards of the WorldTour, thanks largely to the PC8’s customisable chassis, which is available in ten standard colour shells. Our unit’s anodised gold colourway has caused much rubbernecking during our test period, an act often accompanied by the words ‘what computer is that?’ This question proves the specialised nature of the PC8 and why it lives in the shadow of the segment incumbents, not that this bothers SRM in the slightest. SRM itself has waxed lyrical about the fact that this specific unit (and its broader product offering) is not for the masses, but rather a focused demographic at the higher end of the spectrum. But back to the aesthetics…

Further personalisation can be had by going fully custom, which includes bolder, more unique colours as well as the inclusion of ornate motifs for the sides. Regardless of which colour/design route you take, the SRM PC8 is minimalist in every way with a three-button layout taking centre stage. The PC8 moniker takes pride of place at the upper panel of the shell with a solitary SRM logo at the bottom right section just above the mounting clip. Owing to SRM’s unique mounting system, the logo has become somewhat worn over the test period as the clipping mechanism makes contact with this section of the unit.

The only attribute that may take some getting used to is the way SRM has designed the mounting system. Unlike some of the segment perennials that use symmetrical mounting paradigms, the PC8 is offset to the right. Depending on which SRM mounting bracket you use (and there are many) this can result in a misalignment, so consideration should be taken before making a decision.

In terms of its proportions, the PC8 measures 71mm x 63mm x 20mm (width, height, depth) so it’s pretty square-like compared to its rivals. The unit weighs just 93g (actual) and combines a 6061 aluminium (shell) with a hard-wearing plastic casing (rear), making for a hardy, bombproof construction that has held up well over the past year and a bit.

SRM has made screen customisation a relatively easy exercise by introducing a smartphone app (the PC8 mobile app) to populate performance metrics and data fields.  It’s a simple exercise and allows the user to tailor the screen, of which there are four variations. Again there’s nothing fancy about the display. It’s pretty basic and foregoes a trick colour screen in favour of a black and white LCD layout complete with light-sensitive backlighting. The PC8, however, doesn’t need the extra garnishing, touchscreen functionality, colour screen and gimmicks of its rivals – it’s a prime example of the less-is-more philosophy and I like that very much.

Some of the technical highlights include on-board memory of 500 MB (4,000 hours of data storage), a built-in motion sensor that automatically turns on the PC8 when movement is detected, a magnetic charger that is interchangeable with all SRM power meters as well as up to four different bicycle profiles. From a connectivity point of view, rides can be uploaded wirelessly to third-party apps such as Strava and Training Peaks. It’s also compatible with all ANT+ power meters, not just SRM units, which has been a blessing considering how many of the best power meters pass through my door for testing.

The battery is claimed to last up to 45 hours which is in line with its adversaries. Over my test period, battery life has varied depending on the weather conditions and sensor connections but, on average, the PC8 returns between 20 and 30 hours – besides, you can turn off the backlight and GPS to prolong things. Standby time is rated at three weeks.

When it comes to data crunching the SRM Analysis software is brilliant for going through monitoring your training metrics, ride files and training load. It works just like any modern training software but is designed specifically around the PC8 and SRM power meters.

In terms of operation, the SRM PC8 is fairly easy to use but will require a different approach and mindset as it’s been designed for the number cruncher, not the broader cycling audience. That said, it will take time to get familiar with the three-button layout – the PC8 doesn’t have touchscreen functionality. Despite it operating via just three buttons (Pro, Mode, Set), you’ll quickly get accustomed to the way everything works.

To activate the PC8 you’ll need to hold the ‘mode’ button for three seconds. This will furnish you with the option to start a new ride, change your profile or continue a previous ride. Holding ‘mode’ will put the PC8 back into standby mode but let’s take a closer look at what these buttons do in detail (each button has two functions, short key press and long key press).

Mode: As previously mentioned, long key press will lock or unlock the PC8. The short key press functions as ‘next’ to help with navigating through the various screen functions.

Set: This button is the heart of the PC8’s interval functionality. The short key press starts/stops an interval (this will also activate interval-specific screens/pages). The long key press will manually start/stop a ride.

In terms of profiles, four bikes can be added which is a real boon for those who train or race various disciplines. Each of these profiles can be tailored further depending on personal preference – each profile has four customisable pages.

To keep the SRM PC8 more in line with current standards it’s been outfitted with GPS (previous iterations used a speed sensor only). And while the GPS will provide real-time speed and the like, it often takes several minutes to acquire satellites which is a real pain when you’re running late or limited for time. To nullify this issue, I’ve been using it together with the included speed sensor to ensure there are no delays.

The only other foible comes when swapping the device from bike to bike as the mounting system is largely bike-specific which limits use owing to various handlebar standards. As such, most of my testing and riding was shared between a Cannondale SuperSix Evo and SuperSlice TT bike – I purchased two extra mounts. The bracket that was included with the box broke after a few rides but that was my fault as I overtightened the screw which broke the plastic clasp.

To dismiss the SRM PC8 as a cycling computer based purely on its lack of mapping and navigational prompting would be a foolish decision – it’s not a navigational device. Instead, it’s been designed as a performance-metric-monitoring unit and nothing else. What this means is that the SRM PC8 caters for the number crunchers – cyclists obsessed with data harvesting, training and racing, not exploring. And while this makes it appreciably niche there’s still a sizeable demographic that finds it highly attractive and aspirational based purely on what it stands for. Furthermore, it’s achingly beautiful and offers a fuss-free user experience that’s quite easily one of the best in the segment.

Of course, it’s hard to ignore the hefty price tag of £679 / $749 / €769 / AU$1,089. That’s a considerable amount of cash but the SRM PC8 should be seen as an investment rather than a purchase – the brand has a lot of clout and is considered the gold standard for data harvesting, accuracy, and precision. Unlike many of its rivals, it’s practically faultless from a reliability perspective but whether or not this justifies SRM’s pricing rhetoric is for you to decide. The company cites its in-house German production to the somewhat exorbitant pricing.

Unfortunately, with the surge of new cyclists coming through the ranks, the lack of navigation is the only attribute separating the SRM PC8 from scoring 100 per cent in what has become one of the most hotly contested segments in the industry. If judged purely on what it offers cyclists as a holistic performance tracker and monitor, it’s unbeatable.